Institute “Kazakhskiy Promtransproekt” – the oldest and one of the largest design and survey organizations of industrial transport in the Central Asian region – was formed in 1958. Many facilities in Kazakhstan, all the republics of Central Asia, as well as in Russia and Lithuania were built on the projects of the Institute.

History of any company has its remarkable dates when the past activities are being summarized, the results are being assessed, the most interesting and important periods are being recalled, when the difficulties and problems areforgotten and everything positive and good is perceived brighter. In 2018, we have celebrated the sixtieth anniversary of interesting and intense work of our Institute.

We are proud to note that “Kazakhskiy Promtransproekt” has made ​​a significant contribution to industrial development of  huge region – of all Central Asia.

Thousands kilometers of railways and roads in conjunction with all the necessary facilities and arrangements: bridges, overpasses and transport interchanges, transportation service companies (locomotive and wagon depot, equipment units, garages, and track- and road-repair points) – were build on our projects. Also many logistics centers in public procurement system of the national economy were built on our design.

The Institute has developed external transport projects for significant part of industrial enterprises in Kazakhstan, including Karaganda Metallurgical Combine, Leninogorsk and Irtysh Polymetallic complexes,Dzhezkazgan Mining and Metallurgical Combine, chemical plants in Dzhambul and Shymkent, “Karagandaugol” association, Lead-Zinc, Titanium and Magnesium complexes in Ust-Kamenogorsk, and for many other large and small companies.

The Organization has also developed transportation projects in other regions: Trans-Baikal apatite combine, Tugnuisky coal pit, “Vorgashorskaya №4” coal mines of “Vorkuta coal” union and “Uglegorskaya” of “Sakhalin-coal” and many other enterprises in Russia, Uzbekistan, Kyrgyzstan, Tajikistan and Turkmenistan.

In recent years the Institute is actively participating in transport network development of Republic of Kazakhstan.

“Kyzylasker-Kirov” highway with a bridge over the Syr Darya  was built  on our project. The necessity of constructing of the highway is explained by the fact that the territory of the Southern Maktaaral District was separated from the rest of the country by Shardara water storage basin and the transport connection could be carried out through the territory of neighboring country. This route 54 km length, 18 km of which are laid on a regular basis along the dam through the flooded land, provided year-round reliable transport communication.

The Institute staff has developed a series of traffic intersections construction projects, including the interchange at Sain str.and Raiymbek ave. intersection in Almaty.

This first Kazakhstani three-level interchange has won 2nd prize in the contest of industrial projects carried out by using the software package CREDO in category “Transport”  in 2001.

The great merit in Institute development and its success belongs to Vitaliy P.Petukhov, who led our company for over forty years – from 1967 to April 2008. He had to lead the organization in the most difficult time – the years of perestroika, the collapse of the country and the stagnation of the economy.

The staff of the Institute has fully experienced the transition to new economic relations.

In 1994, our industrial building, the object of our pride, was taken from us. It was one of the best buildings for the design organization in Almaty, with all conditions for productive creative work of hundreds of designers. This was the most difficult period in the Institute’ life: moving to the “rental place”, absence of orders, mass dismissal of specialists. Only few people believed in better future for organization.

Only the will, perseverance and dedication of Vitaliy P.Petukhov allowed the Institution to survive, saving much of what was created.

The partnership relations with many client organizations including city ​​governments were remained. As soon as the orders appeared, people began to return. We have managed to safe and buy back the property of the Institute maintenance base and suburban rest facilities for employees. And finally the manufacturing  rooms for the designers work have appeared.

We have equipped all workplaces with computers with licensed software, have purchased modern copying machines, electronic geodetic instruments, new drilling techniques and much more.

Vladimir A. Golovin, the graduate of the Karaganda Polytechnic Institute, has become the successor to Vitaliy P. Petukhov. He joined Promtransproekt as a young specialist in the far 1976th. Soon, Vladimir has become the head of production planning department, then the deputy director, and in 2008th he has been appointed as Director of the Institute.

Design Institute “Kazakhskiy Promtransproekt” has managed to keep the skeleton staff of experienced designers, and currently is being actively replenished be talented young professionals, graduates who are ready to solve any of the most complex production problems.

The stuff of Institute is confident in the future, its experts are investing all their knowledge and experience in the transport sector development of our country. 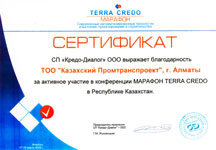 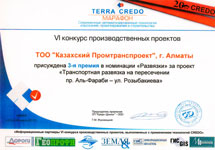 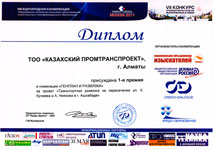 State license for rendering services in the field of environmental protection

The certificate on the laboratory measurement assessment.